Click to watch the video—20 minutes. Read on for more information.

Check out my A+ Exam Cram book and A+ Complete Video Course.

The preceding video was edited and rendered using the 960 PRO drive, fairly quickly, and without any hiccups of any kind. Some quick history, I was previously using an Intel 750 Series PCIe 400 GB drive and it is definitely fast, but I have had a couple issues with it in the past. Long story short, there was a need for something more reliable. Interesting that a drive with a smaller footprint can potentially be more reliable and faster as well—but there it is—in this particular case. The main concern is heat dissipation, which I will return to later in this post.

I’m now using this as my main video editing drive. So far it has worked well for my needs (720P and 1080P multi-layer recordings).

You can see the Samsung 960 PRO and the Intel 750 Series in the figure below. 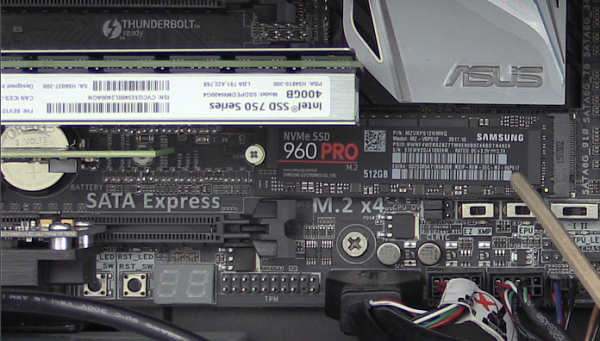 After reboot, Windows 10 did not see the drive. I had to actually disconnect the Intel 750 Series drive and reset the UEFI/BIOS to the optimal defaults. Then, Windows saw everything in the Device Manager. Windows installed its generic NVMe storage controller driver, which I updated to the Samsung driver. After initializing the drive in Disk Management it worked flawlessly. 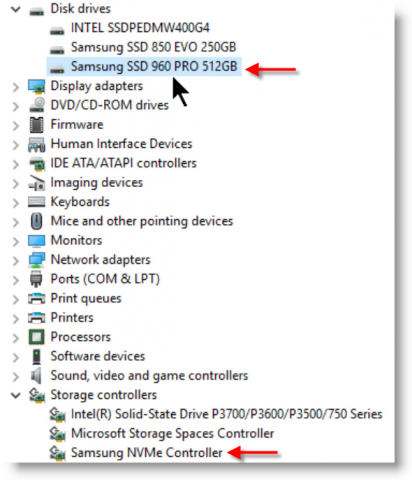 The following figures show data test results using CrystalDiskMark (CDM) for the 960 PRO and the Intel 750. 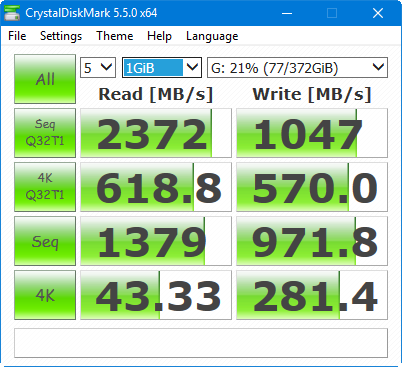 As you can see, the sequential read and write numbers for the 960 PRO are substantially higher than the 750 Series drive. 2nd and 3rd tests were very similar (+/- 1% change).  A similar increase in speed also occurred when I moved equal chunks of actual work data to and from each drive. Somewhere in the neighborhood of 35 to 45% faster. Gaming on the 960 PRO was as good or better than the 750 Series with minimal heat increase—even with the massive heat pouring off of the video card. It’s a pretty big PC with good airflow so I wasn’t too concerned about that, but that should definitely concern the laptop gamer (especially 4K gamers), and 4K video editors. More on heat dissipation later.

When it came to my primary goal—rendering videos—I noticed a couple things. First, for smaller videos there wasn’t much of a difference. Given that the bulk of the work is done by the CPU, GPU, and RAM when rendering, it isn’t very surprising. What did interest me was that longer more complicated videos with multiple layers took a bit longer to render on the 960 PRO compared to the 750 Series. Perhaps 10 to 20% longer. However, elements of the video (such as transitions) appear smoother in the final video (generally MP4s) when rendering the project from the 960 PRO drive.

Heat was the main concern with this drive, mainly because it has no heat sinks. I decided not to go with another PCIe card-based NVMe device so that I could free up a slot. Now, the use of an M.2 drive negates the last PCIe x16 ver. 3 slot on the Asus X99 motherboard, but I’m good with that because the PCIe SSDs (and many other cards) can’t use that slot anyway because of various obstruction. So it is ergonomically better. The beauty of the PCIe card-based SSDs is that they have the real estate for giant heat sinks, and the Intel 750 drive always hovered around between 40° and 45° Celsius, regardless of its usage. The lack of a heatsink on many M.2 drives is a definite concern.

I would be hesitant to install the 960 PRO (or other similar M.2 form factor drives) to a laptop because of the tight space and amount of heat that is generated by the device. But the PC I installed it to has good airflow and has room for additional fans or other cooling methods. But the concern is still there. According to Samsung, the sticker which covers the chips has a copper lining to help with heat dissipation. (Removal of the sticker voids the warranty BTW). But realistically, I don’t see that helping very much, especially in a laptop environment—and most especially in a laptop that has an overworked CPU, GPU, and RAM. So I suggest caution and a lot of testing when considering this device for a laptop. Overheating and subsequent damage are distinct possibilities especially in a laptop that does 4K streaming, gaming, video editing, torrents, and so on.

That said, after a couple of weeks of use I am feeling pretty good about the 960 PRO M.2 SSD for use in a tower PC. The highest temperature I have seen is 62° Celsius. And while this is significantly higher than the Intel 750 PCIe SSD, it is still acceptable. Plus, that was only during the CDM data tests. I used HWMonitor for these tests. The breakdown for heat is as follows:

It would seem that as the drive gets “burned-in” it performs similarly but at slightly lower temperatures. During the CDM tests the average case fan speed increase was negligible (1% increase maximum).

Here’s a snapshot of the 960 PRO and the GTX 970 measured by HWMonitor during the first CDM test. Current temps are circled in red, maximums are in the third column:

So, I’m satisfied with the temperatures even under load. And more importantly, I am happy with the average temperature while editing and rendering videos. If at some point I make the move to 4K video, the device might have some trouble. I could see the need for the massive heat sinks incorporated in a NVMe PCIe card. But we’ll bridge that potential issue when we get there. Keep in mind that this is a fairly powerful computer with good airflow, so the device is not taxed as much as it might be in other environments—such as laptops, microATX systems, and so on.

How does this relate to the CompTIA A+ certification?

An A+ candidate should understand what the M.2 form factor is and how it can be used with PCIe, SATA, or USB technologies. Our device is based on the PCIe bus and essentially works as a x4 PCIe device. You should also understand what NVMe is (non-volatile memory express) and that NVMe can be utilized by devices that connect to an M.2 slot or an actual PCIe x4 or x16 slot.

You should know how to properly install the device: physically, within the BIOS/UEFI, and within Windows and other operating systems. In addition, if the drive is to be used as a boot device, additional BIOS configurations are often necessary. Finally, understand how to do some basic testing of the device for data transfer and for heat dissipation.

Check out my A+ Exam Cram book and A+ Complete Video Course.

I purchased the Samsung 960 PRO M.2 512 GB SSD from Amazon for $289 with free shipping in November of 2017. Price was fluctuating between $289 and $329 so I needed to wait a couple of days to save the 40 dollars. Price fluctuations of as much as 25% are common—be patient! Always shop around! There seems to be no lack of availability for this product as of early December, 2017, but generally, as the larger versions are released, the smaller versions get cheaper and subsequently become more difficult to find.

All of my video products (and e-books) are available on the O’Reilly Training Platform. (subscription required.)

Or, go to Pearson for my books and videos.

Or, check out my books on Amazon.